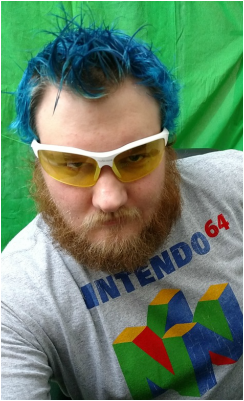 Hello! My name is Zyaldar (or Zy for short)! I consider myself a variety streamer/gamer in which I don't stick to a single type of game. It's actually hard for me to pick a 'favorite' but if I must say what my favorite genre of games is then that would be RPGs.

Ever since I was little I remember playing video games. Growing up I used to hear from many people that gaming was a waste of time. I am here to prove them wrong by showing how gaming can be used for good and to build a community for myself and my friends to hang out and have fun!

The Wingèd Blades is a team name that myself and a few close friends came up with back in high school. There is sentimental value to this name and ever since we were younger we wanted our team to mean something. Now I have the chance to make this happen by getting YOU involved with what I do. I don't want to be considered a one-way streamer. I stream/game to interact with YOU so that WE can grow our community and team together!

Feel free to friend me on any gaming platform. Just look for the name Zyaldar!

Where does your name come from?
There's actually a long story behind my name. It all started when I was about in 2nd grade, probably about 8 or 9 (I honestly don't know how old.) I used to go to a summer camp where I had a really good friend that would tell me all about these amazing games. One game in particular I wanted so bad called Asheron's Call (It's an MMORPG like Ever Quest, which I believe came out before EQ did.) I never heard of a game where you can play online with other people before so naturally I wanted it! Sadly my parents wouldn't allow me to get this game because we had dial-up internet and they always needed the phone to not be tied up. I was so hopeful back then that my friend told me to come up with a username. It took me about a week but I finally came up with Slayer!

Now back then I was an ignorant kid and I thought that name belonged to me. Little did I know it was actually a popular name. I never got the game but I kept the name with me growing up and using it with everything. Unfortunately I had to add numbers to it so I added my favorite number 176 (coincidentally that was also the number for Cartoon Network). Everywhere I went I was either Slayer or Slayer176. As I got older and played more games online I naturally met more and more people. Usually when they saw my name they would say, "Slayer? You mean like the band?" or "One of my favorite animes is The Slayers too!"

I got so irritated with that... until one day in high school I decided to change my online name. During my high school years I was big into Role Playing online with friends. So much so that I even created a couple characters with well thought out back stories. At that time I looked at my name, Slayer, and wanted something more original to me. I played around with some letters and BOOM! Zyaldar was created! Since then I have been Zyaldar ever since on everything!
What games do you play?
I like to consider myself a variety gamer/streamer. I don't just play a specific game or even lean towards a specific platform. I am a console gamer as well as a PC gamer. I play anything from RPGs (My favorite), platformers, FPS, puzzle, adventure, etc... There's barely anything that I will not be willing to give a chance.​
What is the #100DaysOfGaming Challenge?
The 100 Days Of Gaming challenge was created by a fellow Extra Life member, HeroByClicking. In this challenge you play games for 100 days and if possible play a different game every day. Typically pick games that you have never tried before or played in several years. The point of this challenge is to help promote and bring about curiosity about Extra Life. The challenge typically starts 100 days before the big game day but other Extra Lifers have started sooner then that. The important thing is to bring about awareness to Extra Life.

Here is my list of games from 2015
What consoles do you stream?
Here is a list of other hardware that I use to stream or have the capabilities of streaming.